Massive queues have formed at Sydney Airport sparking travel chaos ahead of the long weekend.

Thousands of passengers have been forced to wait hours to check-in as long lines formed in the terminals and stretched out the door at 6am on Friday.

More than 80,000 travellers are expected to pass through the airport as the long weekend kicks into swing.

Similar scenes of chaos have begun to unfold across the country with passengers queuing at Melbourne Airport as staff brace for their busiest day since the Covid pandemic with 95,000 passengers expected to pass through the terminals. 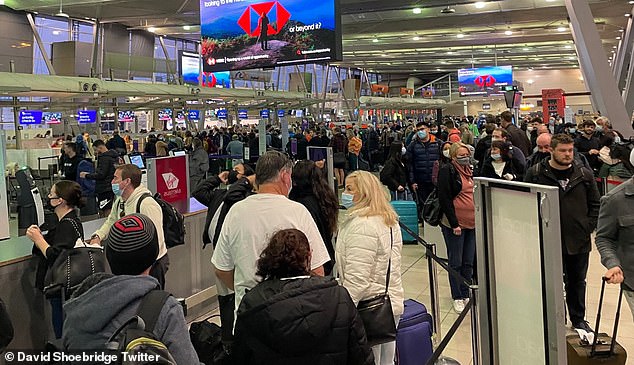 Travellers have been told to arrive at least two hours before their departure time as airport staff struggle to cope with the massive influx.

Greens senator David Shoebridge was among the crowd waiting to board a flight from Sydney to Melbourne.

‘Another holiday and another meltdown at Sydney’s privatised airport,’ he wrote on Twitter.

‘Massive queue for bag drop then another one for security. They knew in advance how many people were coming because they sold tickets.’

One traveller headed for Melbourne described the scenes of chaos as ‘stressful’.

Another person wrote on Twitter: ‘Allow some extra time if you’re heading to the Sydney airport this morning.

‘Long check-in lines as thousands are expected to travel for the long weekend.’

One holidaymaker said they had arrived three hours early and still weren’t certain if they would make their flight.

‘#Sydney airport is utter bedlam this morning,’ she wrote. 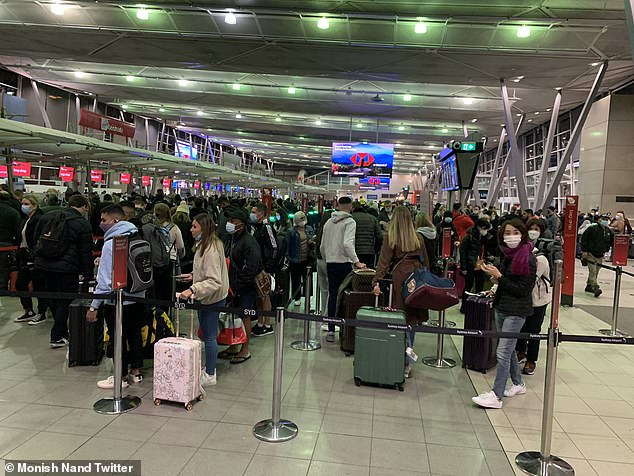 ‘Bag drops are even melting down, queues to join queues. Glad I’m here 3 hours early but still may not make it.’

Sydney Airport will hold a massive jobs fair next Thursday as it ‘urgently’ recruits staff to cope with the influx of passengers hoping to get away after two years of border closures from the Covid pandemic.

Security, baggage handling, government agencies, airlines, hospitality and retail are among the roles that will be advertised.

There are around 800 businesses all operating at Sydney Airport, with masks mandatory inside the terminals.

The fair will run between the hours of 10am and 4pm and is taking place in the T1 International Terminal.

‘The jobs fair will give you an opportunity to talk to different employers at the airport. Over 40 businesses will be joining us on the day,’ the airport said. 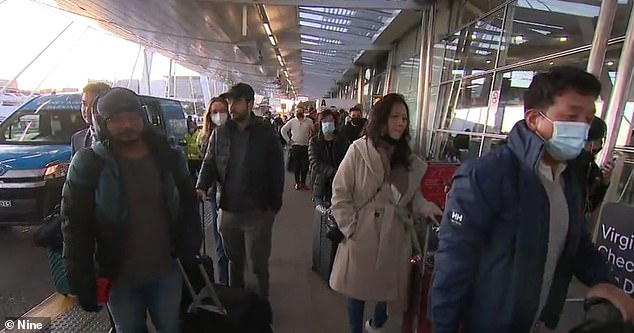 The urgent callout for staff comes after countless passengers complained about huge wait times before boarding their flights, and even longer delays trying to get their passports.

At the end of April passengers at Sydney Airport were seen waiting in lines that stretched to up to 300 metres long, as queues snaked around the security checkpoints.

Similar delays were seen earlier that month for travellers planning a trip for the start of school holidays with queues stretching to one kilometre long.

Passengers complained of missing their flights while some claimed the long hold-up in the terminals was worsened by queue jumpers barging to the front of the lines.

Airport bosses blamed school holidays, a shortage of security personnel and, remarkably, forgetful passengers out of the habit of removing items from their luggage for scanning.

More recently those wanting to travel abroad have been set back by massive delays in getting their passports, or having them renewed.

Some have been waiting three months to get their passports, with many fearing they’ll have to postpone or cancel their holidays altogether.

Sydney university student Ed Andronicus has been waiting nine weeks for his new passport which he needs when he travels to Bali next month.

A technical glitch at the city’s passport office on Tuesday made it all the more difficult, with some residents waiting all day just to be turned away.

‘Been waiting at Sydney passport office for almost nine hours today. No communication about what is going on, people being turned away who have been waiting all day with flights tomorrow, because the printers have been turned off now (they were meant to close at 4pm). Appalling,’ one woman fumed.